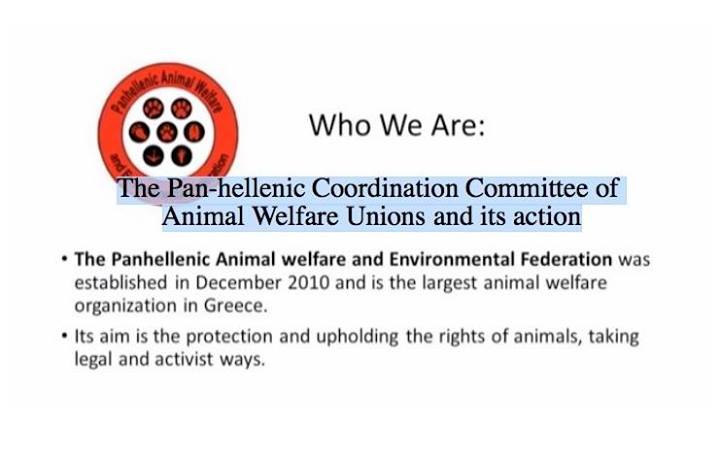 The Panhellenic Animal welfare and Environmental Federation, was established December 2010 and is the largest animal welfare organization in Greece.
Its aim is the protection and upholding the rights of animals, taking legal and activist ways.
Actions taken for this purpose are:

The planning of scientific and realistic beliefs and proposals regarding the animals sent to all competent authorities (Ministries, Municipalities, Vet associations, District Attorneys) and creating an every day lobby so as to have those plans legalized.

March 2012, PFPO after meeting the Vice Minister of Citizens Rights Mr. E.OIKONOMOU, achieved the sending of a circular to all Police Departments of Greece clarifying matters re. Law 4039/2012.
Many of our proposals have been also inserted into this law, and this after a lot of dynamic actions towards the Ministry of Agriculture and Food as well as in Parliament whilst passing of the law,
such as
the abolition of the use of animals in Circuses and spectacles,
the acceptance that a maltreatment of an animal is a penal case the restriction of the use of euthanasia only when the animal’s health condition is non curable
the abolition of the use of euthanasia in cases of leishmania .

In November 2012 PFPO was invited to participate to the discussion held in Brussels with the topic, “stray animals in Greece control of their population”

Campaigns and activist protestations to inform and make people
aware of the correct and legal use of the animals as sentient and intelligent creatures.

The collaboration with many foreign animal welfare societies
Such as the British Union of the Abolition of the Vivisection, Anti-fur Coalition)

The continuous care for animals in need

Seizure of animals illegally sold and their deliverance

The reporting and taking legal measures against people or groups
going against the law.

ORGANIZING Congresses
In October 2011 PFPO organized a meeting with regard to “
Meeting for the European Animal Welfare Culture in Greece today”
In February 2013 organized a workshop collaborating with the Union of District Attorneys as well as Supreme Courts Vice D.A, Mr Emmanuel –Roussos Papadakis discussing ‘incidental issues of our legislation against EU’ s Recommendations, the implementation and the social approval.
The result of this workshop was a circular issued by the Supreme Court
“with regard to the clarification of matters that have been raised upon the application of the law 4039/2012”
In this workshop speakers were lawyers, Constitutionalists, District attorneys, Professors of Philosophy, Veterinary Criminology and Psychiatrists as well as representatives from the Police Head Quarters and Municipalities.

In August of 2013, PFPO took part and spoke for the animal rights in the Global Congress of Philosophy, to be in Athens.

PFPO, participates in activism and promotions regarding Environmental issues
Such as the fast truck for the Industrial Renewable Energy, the destruction of the Environment in Chalkidiki, etc

Finally , December 2013, P.F.P.O will co-organize with the Municipality of ATHENS and the University of Athens, DPT OF PHILOSOPHY, a two days Event in the MUSIC HALL OF ATHENS. An ORATORIUM WRITTEN specially for ANIMALS will be first presented to the public, and will be followed by discussions given from University Professors regarding animal diseases. The participants of this event, will be, The American Professor of Philosophy and fighter for the rights of animals Mr. Peter STEAGER and through Skype , DR.GARY STAINER, and GARY FRANZIONE, Professors of Philosophy in American Universities. 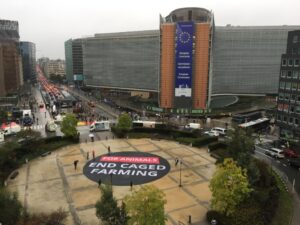 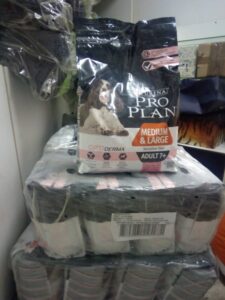 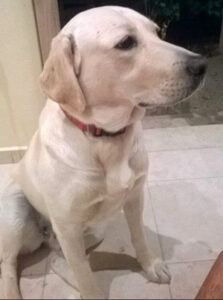